In Smith v Rudolph, the First Department affirms a trial court decision to set aside a personal injury verdict in the plaintiff’s favor because defense counsel’s conduct was so egregious that it deprived the plaintiff of fair trial.  The Court held:

Here are some examples of what defense counsel did to justify the new trial in the interest of justice: 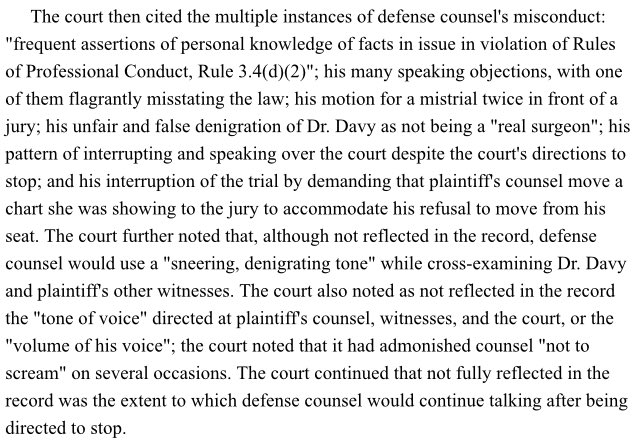 Although it is certainly strange for the plaintiff to have moved to set aside the verdict after winning, the jury’s failure to award any future damages and apportion the defendant only 70% of the fault likely prompted the motion.

The First Department held that given the outrageous conduct of defense counsel, which affected the entire trial, it was not an abuse of the trial court’s discretion to set aside the verdict in the interest of justice.  The concurrence, however, was quick to point out that this was the rarest of cases, and it is a very high burden to show that the conduct of counsel so prejudiced the trial as to warrant vacatur of a verdict.

Interestingly, the First Department seems to have reached this question in an exercise of its interest of justice jurisdiction because the plaintiff never preserved it by moving for a mistrial while defense counsel’s conduct was occurring.  This will pose a significant reviewability problem should the defendant ever want to take the issue to the Court of Appeals.