In Connaughton v Chipotle Mexican Grill, Inc. (No. 46), a celebrity chef sued Chipotle for fraudulent inducement after he entered an agreement to develop a ramen noodle chain for Chipotle. The deal, however, fell through when the plaintiff was told that Chipotle had previously entered a similar deal with a different celebrity chef, and that the other chef had a non-disclosure agreement and would sue under it if Chipotle proceeded with the plaintiff’s ramen noodle house concept. Chipotle told the plaintiff to continue working on the ramen restaurant nevertheless, but he refused and was fired.

The plaintiff brought this action against Chipotle for fraudulent inducement  seeking damages “in an amount to be determined at trial, including, but not limited to, the value of his Chipotle equity and lost business opportunities in connection with his ramen concept.”  Supreme Court dismissed the action because the plaintiff failed to allege any out-of-pocket losses as a result of the alleged fraud. The Appellate Division, First Department affirmed, with two Justices dissenting.

The Court of Appeals agreed, holding that if the plaintiff does not plead out-of-pocket pecuniary loss flowing from an alleged fraud, the claim fails to state a cause of action. 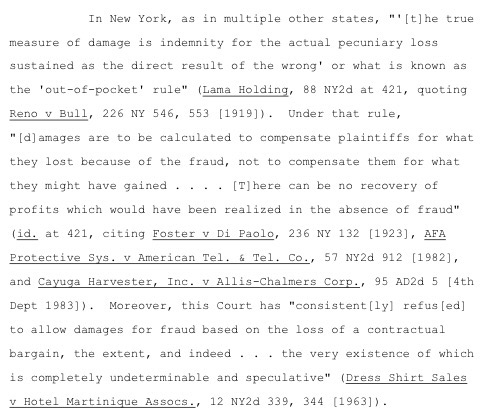 Here, the Court held, the chef alleged nothing more than a speculative lost business opportunity, without any out-of-pocket losses.  That, the Court held, is insufficient to plead the necessary damages to state a claim for fraudulent inducement.

The Court of Appeals’ opinion can be found here.