The list of names to fill the Court of Appeals seat vacated after the tragic death of Associate Judge Shelia Abdus-Salaam has been narrowed to 7.  In what was a really quick two-week turnaround (the Commission’s selection process typically takes months), the Commission on Judicial Nomination reviewed 40 applications, interviewed 16 of the applicants, and sent a list heavy on serving appellate judges to Governor Andrew Cuomo to pick the next Associate Judge of the Court of Appeals.  Here are the nominees:

That’s five sitting Appellate Division Justices (four from the First Department, from which Judge Abdus-Salaam was appointed, and the Presiding Justice of the Fourth Department), one SDNY bankruptcy judge, and one attorney in private practice.  When you think about the current makeup of the Court, that the list is heavy on people with significant judicial experience isn’t surprising.  Of the 6 current Judges on the Court, only two were previously appellate judges–Judges Leslie Stein, who sat on the Third Department, and Eugene Fahey, who served on the Fourth Department.  The rest either have no prior judicial experience–Judges Jenny Rivera, Michael Garcia, and Rowan Wilson–or served on the trial bench–Chief Judge Janet DiFiore.  The Commission clearly appears to have recognized that when you are staffing the highest court in the state, it’s important to have a wealth of judicial experience from which to draw.

Indeed, Judge Feinman brings over 20 years of judicial experience from the New York City Civil Court, Supreme Court, and the First Department.  Judge Gische isn’t far behind, with 17 years on the bench.  Judge Webber has been a judge since 1994, and Presiding Justice Whalen since 2006.  Judge Richter beats them all, with 30 years as a judge, including the last 8 on the First Department. 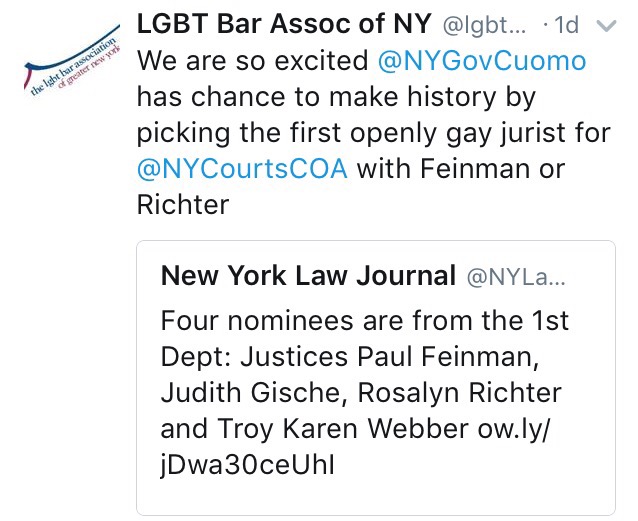 Governor Cuomo now technically has to wait 15 days to pick from the list of 7 nominees, as I discussed here.  But, in light of the Governor’s expressed goal to have the appointment made and the nominee confirmed by the Senate before the end of the legislative session at the end of the month, he may not wait the required 15 days.  As a Court of Appeals staffer pointed out to me, Governor Cuomo has in the past ignored the Judiciary Law provision that requires the pick to be made no earlier than 15 days and no later than 30 days after he receives the list from the Commission, and there really isn’t any enforcing authority that could make him wait for the “window” to make the pick.  So, with his own deadline for Senate confirmation looming in only a few weeks, and what is expected to be a packed end of the legislative session push, it would not be surprising to see the Governor meet with the nominees this coming week and have a pick before the 15-day waiting period ends.

Whoever Governor Cuomo picks for the vacant seat on the Court, New Yorkers can rest assured that the Court of Appeals will continue to remain in good hands.  For more information on the nominees, the Commission on Judicial Nominations’ list can be found here.

I am a litigation partner at Whitman Osterman & Hanna LLP, in Albany, New York, with extensive experience in the New York appellate courts. I clerked at the New York Court of Appeals, and now keep up to date with the new and leaveworthy issues in New York law.