Under the Family Law, the State has certain authority to seek to protect children in danger by removing them temporarily from their parents’ care. Placing a child in foster care is a heart-wrenching decision that under the law has to be based on what is in the best interests of the child. That decision, however, has to weigh competing rights. As former Chief Judge Kaye put it, 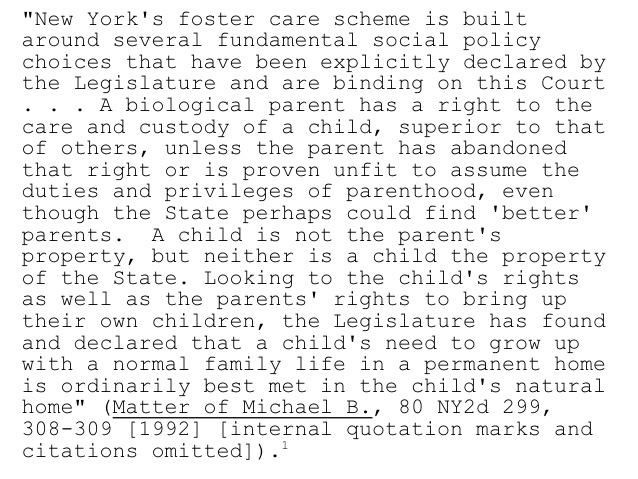 Parental rights are fundamental constitutional rights and cannot be lightly taken away.

In Matter of Jamie J. (No. 118), the Court of Appeals was asked to address when, if ever, Family Court may continue to exert jurisdiction over and continue a foster care placement after a Family Law neglect petition has been dismissed as without foundation.  In Jaime J., a week after Jaime was born, the Wayne County Department of Social Services requested that Family Court remove her from her mother’s care without first filing a neglect petition against the mother. Once a neglect petition was filed, more than a year went by before Family Court held a fact-finding hearing on DSS’s allegations of neglect.

Once the petition was dismissed, Family Court would regularly end Jaime J.’s temporary foster care placement and return her to her mother. But that didn’t happen. Instead, Family Court held a second permanency hearing at DSS’s insistence, which argued that Family Law Article 10-A gave the Court continuing jurisdiction over Jaime to continue her foster care placement even though the neglect petition had been dismissed.

Jaime’s mother strenuously objected to the Court’s refusal to release Jaime from foster care and to the second permanency hearing. To quicken review of her objection, the mother consented to Jaime’s continued foster care placement and appealed, arguing that the Family Court was divested of jurisdiction upon dismissal of the neglect petition. After the Appellate Division, Fourth Department affirmed the Family Court permanency order on a 3-2 vote, Jaime’s mother appealed as of right to the Court of Appeals.

The Court of Appeals, in a fairly straightforward decision, held that once a neglect petition that gave DSS the basis to place a child in foster care is dismissed, Family Court loses jurisdiction over the child and must return her to her parents. Article 10-A of the Family Law, which exists “to provide children placed out of their homes timely and effective judicial review that promotes permanency, safety and well-being in their lives” (Family Law § 1086), doesn’t give Family Court continuing jurisdiction to continue a foster placement and hold permanency hearings without a new neglect petition being filed by DSS, the Court held. The Court, therefore, rejected DSS’s

hyperliteral reading of section 1088, divorced from all context, to argue that Family Court’s pre-petition placement of Jamie J. under section 1022 triggered a continuing grant of jurisdiction that survives the eventual dismissal of the neglect petition. In other words, even if the Family Court removes a child who has not been neglected or abused, it has jurisdiction to continue that child’s placement in foster care until and unless it decides otherwise. Section 1088’s place in the overall statutory scheme, the legislative history of article 10-A, and the dictates of parents’ and children’s constitutional rights to remain together compel the opposite conclusion: Family Court’s jurisdiction terminates upon dismissal of the original neglect or abuse petition.

Indeed, the Court held, “adopting the DSS’s interpretation of section 1088 would permit a temporary order issued in an ex parte proceeding to provide an end-run around the protections of article 10.”

The Court held, in light of the importance of keeping families together, DSS shouldn’t have the right to keep a child away from her parents without first proving that they have neglected her under the terms of the Family Law. That’s what’s in the best interests of the child.

The Court of Appeals’ opinion can be found here.