The Appellate Division, Third Department has decided a number of significant issues recently involving the State University of New York’s disciplinary system in sexual assault cases. First, it was Matter of Haug v State Univ. of N.Y. at Potsdam, in which the Court annulled the expulsion of a student accused of sexual assault, finding that the hearsay statement of the accuser wasn’t enough to support the discipline. That case is at the Court of Appeals on an appeal as of right, and has been fully briefed, just waiting for an argument date.

Next, it was Matter of Weber v State Univ. of N.Y., Coll. At Cortland, where the Third Department reached a seemingly contradictory result to Haug. In Weber, the facts were a little more clear, but in neither case did the accused student have the “affirmative consent” to sex that the SUNY Code of Conduct requires. While in Haug, the Third Department vacated the expulsion, in Weber, the Court upheld it.

At the eventual disciplinary hearing, the accuser listened to the proceedings via Skype, but did not participate. Instead, the lead investigator that had filed the disciplinary charges against Jacobson read the accuser’s statement into the record at the hearing. Jacobson was allowed to cross-examine the investigator at the hearing, but not the accuser herself. This was a major point of contention between the majority and dissent at the Third Department.

As the majority explained, under the “‘Students’ bill of rights’ section in the Education Law, the reporting person has the right to ‘[m]ake a decision about whether or not to . . . participate in the judical or conduct process . . . free from pressure by the institution’ (Education Law § 6443).” This protection has two components: first, the accuser can decide whether or not to participate in the hearing, and the school can’t tell him or her that failure to participate could hinder the case; second, the accuser has the right to remain anonymous. In light of these protections, the Court held, Jacobson had no due process right to cross-examine his accuser at the hearing, whether in person, electronically through Skype, through the hearing officer, or by written questions. His right to question the investigator about the accuser’s statement was enough in this case, the majority decided.

The majority recognized, however, that there may be a case where a limited right to cross-examination of the accuser should be permitted. In Weber, for example, “the accused student submitted questions through the hearing officer who reworked the question ‘into a more neutral form'” (Weber, 150 AD3d at 1432). Thus, the majority set out a new rule for when the limited right to cross-examine the accuser arises:

The two Justice dissent, on the other hand, would have held that Jacobson’s due process rights had been violated. The dissent countered: 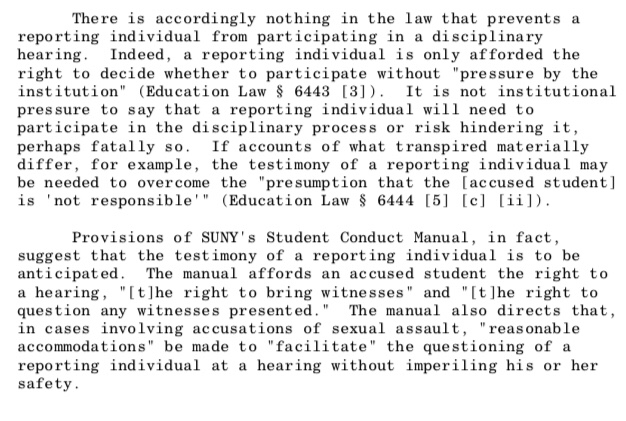 The dissent recognized that cross-examination is not necessary or warranted in many student disciplinary cases, most of which result in nothing more than a slap on the wrist or a suspension from which the student can return to school. But sexual assault cases are different, the dissent reasoned. They lie at the extreme end of disciplinary consequences and, thus, an accused student should have a full panoply of due process rights to cross-examine the accuser in whatever form the hearing officer finds appropriate.

Here’s the thing though. The majority too found a reason to vacate Jacobson’s expulsion. It just wasn’t on due process grounds. Instead, the majority held that the investigator had at the hearing improperly defined what it meant to obtain affirmative consent to sex and suggested that Jacobson had to have been the one to ask for consent because he initiated the sex by penetrating the accuser. That’s not the right definition of either affirmative consent or initiation, the majority held, and it seriously undermined the Board’s decision to sustain the sexual assault charges. So, it sent the case back to the SUNY Disciplinary Board for a new hearing.

The dissent agreed with that flaw too, but because it also found a due process violation, it wouldn’t have sent the case back. Instead, it would have annulled the determination and ended the matter altogether.

Now, Jacobson will have a chance to go back before the Board for a new hearing in the charges, which may be of little comfort to him if he is again denied a chance to have the accuser questioned.

The right of cross examination issue in sexual assault disciplinary hearings is a hard and interesting one. There are certainly important interests on both sides, and I haven’t done enough research to know how those interests should be balanced.

It’s the kind of issue that should be heard by the Court of Appeals so there is a single rule to be applied statewide, but that won’t happen quite yet, unless the Third Department dissenters grant Jacobson leave to appeal. Without an Appellate Division leave grant, the Court of Appeals can’t hear the issue in this case because the remand for a new administrative hearing renders the Appellate Division order nonfinal. It seems to me, though, that this would be a good companion case to Haug, which is now fully submitted before the Court of Appeals. I can’t imagine it will be long before the Court is asked to address the question.

The Appellate Division, Third Department order can be found here.