The Court of Appeals’ February session continues on Thursday, February 8, 2018 with three cases on the argument docket (the Court’s case summaries can be found here).

The Court will hear arguments on the following issues: (1) whether in misappropriation of trade secrets cases, damages can be measured by the misappropriator’s costs avoided, and whether prejudgment interest may be awarded on those damages; (2) when during trial must a criminal defendant invoke the right to proceed pro se; and (3) whether a criminal defendant was improperly denied the right to proceed to trial pro se, but with stand by counsel, and whether the trial court improperly denied the defendant’s attempt to introduce psychiatric evidence to challenge the voluntariness of his Miranda waiver.

Manufacturing plastic security seals is apparently big business.  You know, those seals that are nearly impossible to get off a bottle without a knife but give you a measure of comfort that nobody tampered with your goods before you opened them.  Well, when your company makes those plastic security seals, and three employees steal your trade secrets to take to a competitor, you sue them for misappropriating your hard work and ingenuity.

That is exactly what happened in E.J. Brooks Co. v Cambridge Sec. Seals, and the plaintiff won at trial.  So, the federal district court ordered the defendants to pay back in damages the costs that they avoided by stealing the trade secrets instead of developing the plastic security seals on their own.  The Court, however, denied the plaintiff’s request for prejudgment interest under CPLR 5001, holding in essence that inclusion of prejudgment interest would be duplicative here because the jury awarded damages from the date of the misappropriation to the date of the verdict.

On appeal, the Second Circuit held that finding liability was easy, but the question of the proper amount of damages for the misappropriation was less so.  The Court explained that New York decisions appear to have authorized a number of different measures of damages in misappropriation of trade secrets cases, but never explicitly the costs avoided measure used by the disctrict court below. So, the Second Circuit decided to certify the question to the Court of Appeals to decide. 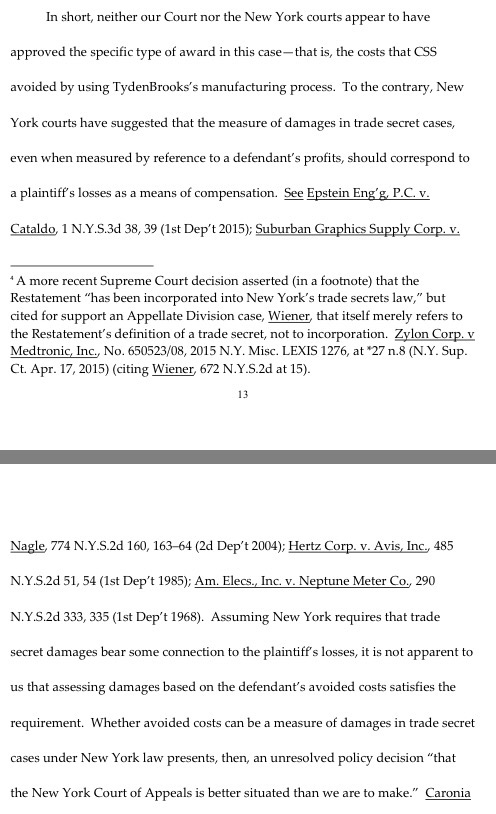 The Court of Appeals will now have to decide these two certified questions:

The Second Circuit’s opinion can be found here.