It isn’t often that New York appellate courts deny someone the right to submit an amicus brief in a pending appeal. It happens, but it’s rare. In fact, the only time that I remember seeing a New York appellate court turn away a proposed amicus brief was when the proposed amicus had a direct financial interest in the outcome of the appeal. The party, thus, wasn’t a true friend of the Court.

Time to add one more to my list.  In White v Cuomo, the case about whether daily fantasy sports are prohibited gambling under Article I, § 9 of the New York Constitution, the Appellate Division, Third Department, on Thursday, denied Rivers Casino’s motion to file an amicus brief in the case. Rivers’ brief had sought to provide the Court with an alternate definition of prohibited gambling, arguing that the term in the Constitution can’t be understood by the definition the Legislature later put in the Penal Law. Instead, it argued, the constitutional term can only be defined by its original meaning at the time the constitutional amendment was adopted in 1894, and at that time all forms of gambling were prohibited regardless of whether skill or luck dominated. Thus, DFS is prohibited gambling, Rivers sought to argue.

The Rules for Amicus Curiae Briefs

The rules for amicus submissions in pending appeals are fairly straightforward. Under Rule 500.23 of the Court of Appeals’ Rules of Practice, the Court looks at these criteria for determining whether to grant amicus relief:

So, under the rules, New York’s appellate courts want to know:

Although the Appellate Division’s Rules don’t have a formal timeliness component, the Court of Appeals has made clear that for an amicus motion to be considered, it must be made returnable at least one month before the appeal is scheduled for oral argument. Failure to comply will likely lead the Court to deny the motion, because the Judges wouldn’t have enough time to consider it before hearing the appeal. I’d venture to say that the Appellate Division likely applies a similar, albeit unexpressed, rule.

The Denial of Rivers’ Amicus Motion

The courts have a great deal of discretion in deciding whether to accept a proposed amicus brief, and unfortunately don’t have to give any reason for their decisions. So, we’re left to guess why the Third Department denied Rivers’ motion. In Rivers’ motion, it explained its interest in the case:

This appeal has important implications for Rivers’ business and for the regulated gambling industry more broadly. The industry has relied upon the settled understanding that the Constitution’s prohibition on gambling bound the Legislature, such that the only way to authorize a form of gambling was through constitutional amendment. To say the least, Chapter 237 fundamentally upsets the legal framework upon which this industry has justifiably relied (Rivers’ Proposed Amicus Brf, at 1).

It identified the issues it wanted the Third Department to consider—whether the constitutional ban on gambling must be interpreted according to its own terms based upon their original meaning—and Rivers’ arguments certainly differ from the parties’ focus on the statutory test for what is prohibited gambling. And the motion was submitted well before the case is scheduled for argument during the November term. Rivers’ motion seems to satisfy most of the Rules’ requirements for amicus submissions.

Here are the two potential issues that could have led to the Court deciding to deny Rivers the right to participate in the case. First, the issue that Rivers sought to raise is a new one to the case, and wasn’t raised by the parties or addressed by Judge Connolly at Supreme Court. That presents a problem under New York precedent. The Appellate Division has previously held that a proposed amicus party can’t raise new issues different from those argued by the parties (see e.g. Colgate-Palmolive Co. v Erie County, 39 AD2d 641 [4th Dept 1972] [“an Amicus curiae is not a party, and cannot assume the functions of one; he must accept the case before the court with issues made by the parties, and may not control the litigation. Nor may he introduce any issues; only the issues raised by the parties may be considered” (quotation marks and alterations omitted)]). And the Court of Appeals’ rules provide that expressly.

That may not be a fatal flaw, however. There’s certainly an argument that the scope of the constitutional definition of gambling has always been in the case, and Rivers’ argument for an originalist interpretation is merely an extension of the parties’ arguments, a new and different way of looking at the issue. But, the Court certainly was within its discretion to have concluded that Rivers’ proposed amicus brief sought to improperly raise a new constitutional issue that no one had addressed before and to have denied Rivers’ motion on that basis.

Second, although the Appellate Division’s rules don’t contain an express requirement for a proposed amicus party to disclose their financial stake in the case or whether a party is backing or funding the amicus submission, whether an amicus party is a true friend of the court, rather than a party with a direct financial interest in the outcome of the case, is certainly something that the Court can, and often does, consider. Indeed, the Court of Appeals’ rules expressly require those disclosures in an amicus motion.

Here, Rivers’ motion does not disclose who contributed to or was financially backing the amicus submission. Rivers states that it has paid a bunch of money for a casino license in reliance on its understanding that the only forms of gambling that will be allowed in New York are those that have secured a constitutional amendment to be excepted from the constitutional ban, like horse racing and casino gambling. Could the Court have been concerned that Rivers’ interest was a purely economic concern about competition to its brick and mortar casino, and wasn’t a true friend of the court seeking to assist the Court with its decision? That’s what some have guessed, including former Court of Appeals Judge Robert Smith: 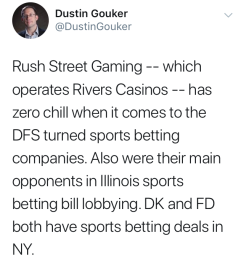 We’ll never know exactly why the Third Department decided against considering Rivers’ amicus brief in support of the plaintiffs’ position that DFS is unconstitutional gambling, but it certainly seems the Court had justifiable grounds for deciding as it did.