Unprecedented times call for unprecedented measures. And we’re certainly in unprecedented times.  With the spread of COVID-19 growing exponentially each day, Chief Judge Janet DiFiore, Chief Administrative Judge Lawrence Marks, and the entire courts system have decided to take unprecedented action to limit in-court proceedings to only those essential for the administration of justice.  All non-essential proceedings are suspended until further order, and that now includes the filing of all litigation papers, under an order issued by Chief Administrative Judge Marks on March 22nd. While lawyers may keep working on their litigation matters, the courts will not be accepting any filings, except for those in enumerated essential proceedings.

Here’s a quick summary of the measures that the New York courts have adopted to try to do its part to keep its employees and the litigants that normally appear before it each day safe (UPDATED as of March 23, 2020):

For the first time that I can recall, the Appellate Division has suspended oral arguments. Each Department is handling it differently. In the First Department, the Court has cancelled all arguments scheduled for March 17, 18, and 19 and is taking those cases on submission. Beginning with the April term, and until the Court orders otherwise, all appeals will be submitted on the briefs or by oral argument through Skype. The Second Department is also taking its appeals on submission, unless the parties request to argue via Skype.

In the Third Department, the Court has strongly encouraged all attorneys who are scheduled to argue during the March term, which runs from March 23rd to 27th, to submit their appeals on the briefs. If argument is required, the Court is rescheduling the arguments for a later date. And in the Fourth Department, the Court has decided to take all arguments scheduled for the March/April term on submission only, without oral argument. Arguments for the May 2020 term will be rescheduled.

To be clear, and to avoid a trap for the unwary, the Appellate Division’s orders did not suspend the statutory deadlines for filing a notice of appeal or a motion for leave to appeal. Those deadlines were not been extended, in the first instance. But Governor Cuomo later issued an executive order tolling all statutory deadlines until April 19th, which includes the service of notices of appeal or motions for leave to appeal. The executive order provides:

In accordance with the directive of the Chief Judge of the State to limit court operations to essential matters during the pendency of the COVID-19 health crisis,   any specific time limit for the commencement, filing, or service of any legal action, notice, motion, or other process or proceeding, as prescribed by the procedural laws of the state, including but not limited to the criminal procedure law, the family court act, the civil practice law and rules, the court of claims act, the surrogate’s court procedure act, and the uniform court acts, or by any other statute, local law, ordinance, order, rule, or regulation, or part thereof, is hereby tolled from the date of this executive order until April 19, 2020.

That fills the gap that had been left by the Appellate Division’s deadline suspension order, and ensures that all deadlines have now been suspended for the duration of this order. Although this executive order only tolls deadlines until April 19th, I would fully expect the Governor to extend this order further if the State’s COVID-19 response is still in full effect as we approach that date.

The Court of Appeals

The Court of Appeals at first decided to proceed with the oral arguments scheduled for its March session, which has argument dates on March 17th, 18th, 24th, and 25th. The Court advised counsel, however, that if they are unable to make it due to the public health crisis, the Court was willing to accommodate argument by videoconference.

As the Court began its first arguments in the March session, it was a remarkable sight to see the Judges observing social distancing by moving Chief Judge DiFiore, Judge Rivera, and Judge Stein from their normal positions on the bench to the advocates’ tables in front of the bench, while the remaining Judges spread out along the bench behind them. As they say, a picture is worth a thousand words: 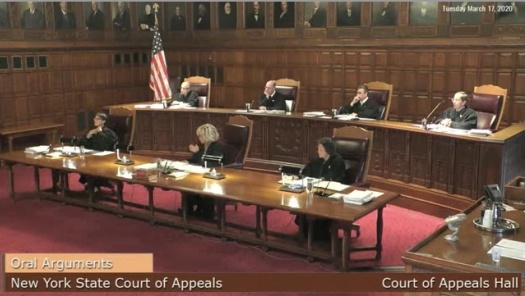 And behind the advocates was an eerily empty courtroom that echoed with each argument.

After holding arguments for the first day of session, the Court of Appeals has now decided to suspend the remainder of its argument calendar for March 18th, 24th, and 25th, and will reschedule those appeals for a later date. The Court will also no longer accept any filings, including stay applications, in person at the Clerk’s Office.

In the New York trial courts, only pending criminal or civil trials may continue. Any trials that have not yet begun will be adjourned pending further order. Further, as of March 16th, all evictions and eviction proceedings are suspended until further notice. All other matters are limited to those that the courts have deemed essential.  No other court appearances will be held to try to ensure the safety of court staff and the parties.

These are certainly trying and uncertain times. The New York courts are trying to do their part to ensure that essential judicial services can still be provided, while ensuring the safety of court employees and the public alike. For updated information about court closures or other steps the courts have taken, the New York State Bar Association has put together a site that is being updated daily with new information, which can be found here. Stay safe everyone.