Whether it’s in response to the COVID-19 court closures, or it was just time to bring the Court more into the digital age, the Court of Appeals announced yesterday that it is amending its rules, effective May 27, 2020, to require parties to file digital copies of all civil motions and opposing papers to those motions, and jurisdictional inquiry responses, with the Court. Before this amendment, the Court’s rules had limited digital filings to the briefs and records filed on appeals. 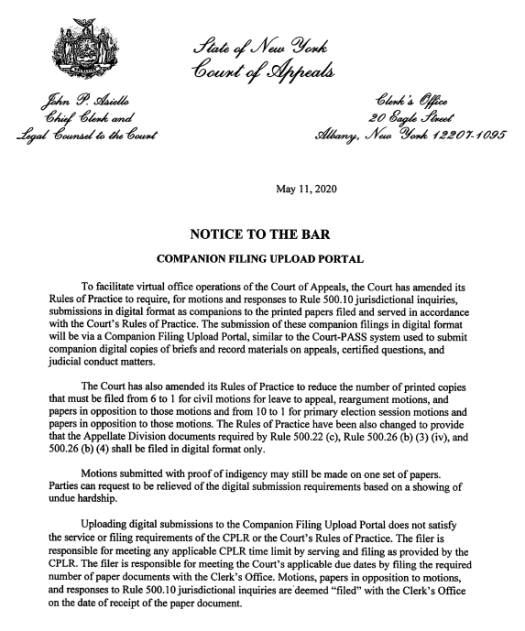 As the Court’s notice to the bar explains, the digital filing does not actually constitute service or filing of the motion. That’s still governed by the CPLR and when the paper copy of the motion papers hits the counter in the Clerk’s Office and is stamped received. But the rule amendments provide that the parties have 7 days after the return date of the motion to upload their digital copies of the motion papers (but of course, you should do it as soon as possible after service—don’t wait if you don’t have to).

What’s most notable about this rule change to me is that the Court is significantly reducing the amount of printed paper copies of the motion papers that have to be filed (from 6 copies to 1), and eliminating entirely the requirement to file paper copies of the Appellate Division briefs and record that must normally accompany civil motions for leave to appeal. That’s an important step. Even the significant revisions to the Appellate Division’s rules in the fall of 2018 still required the parties to file 5 paper copies of the briefs and record. Now at the Court of Appeals, under these rule amendments, you can file your motion for leave with the original and only a single copy for the Court’s use.

Another change to note: under the Court’s rules, you used to have to serve your adversary with two copies of your motion for leave to appeal, and your affidavit of service needed to note specifically that two copies were served (I made the mistake of not noting that two copies were served one too many times, only to get a very nice reminder call from the motion’s clerk upon receipt). No longer. Now, only one copy of the motion needs to be served.

With these changes, here’s hoping that we can move ever closer to a fully digital filing system at both the Court of Appeals and the Appellate Division without the need to serve or submit the extra paper copies that go to sit in a file room somewhere in the basement of Court of Appeals Hall.