UPDATE – In her 2018 State of Our Judiciary speech, Chief Judge Janet DiFiore announced that e-filing will begin in the Appellate Division on March 1, 2018, and new rules have been issued to govern the process. My post going over the new rules and e-filing procedures can be found here.

As Bob Loeb of Orrick, Herrington & Sutcliffe’s appellate group pointed out yesterday, the New York courts have issued a proposed rule amendment that would finally bring e-filing to the Appellate Division. 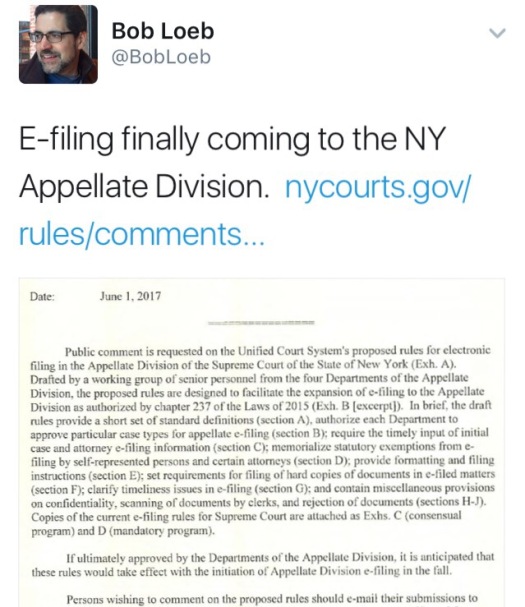 Under the proposed rules, e-filing in identified appeals and original proceedings in the Appellate Division could, if approved, begin as early as this fall. The e-filing system that is proposed is the NYSCEF system used by a number of the counties of the Supreme Court, not, it appears, the Court-PASS system that has been used the Court of Appeals over the past few years.

So, what would be different if e-filing finally makes its way to the Appellate Division? First, once a notice of appeal is entered with the County Clerk and sent to the Appellate Division, the appealing party would be required to file electronically a notice of appearance of sorts, and provide notice to the other parties that the appeal will be e-filed. 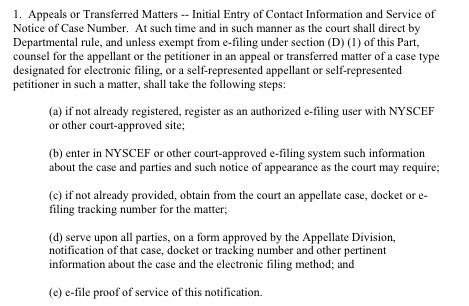 Other counsel would then also be required to appear on the electronic docket, after which all briefs, records, appendices, and other documents would be deemed served when filed electronically.  If an order to show cause or something else is served before the other counsel note their appearances on the docket, it would have to be served in hard copy.

Second, e-filing briefs and the record would not dispense with the requirement to file hard copies with the Court, though it would reduce the number of copies that would have to be filed and dispense with service of hard copies altogether.  Slightly less printing costs, but not yet eliminated totally.  Baby steps in the right direction.

Third, because electronic filing would be the primary filing method, and the hard copies would not be required to be filed until the Clerk’s Office approves the e-filed document, attorneys would no longer be constrained by the 5 p.m. (or sometimes earlier) court closing deadline. Instead, lawyers who can’t just put the pen down can write and edit until their heart’s content or midnight, whichever is earlier.  That’s good news for those of us who have had to have a courier race a brief to the Appellate Division at the last minute before 5, and bad news for procrastinators who need a firm deadline to be productive.  I see many late night filings ahead in the Appellate Division.

E-filing in the Appellate Division has been a long time coming, and it is certainly a welcome addition.  The next amendment I would propose is to eliminate hard copy filings altogether (see the Second Circuit’s NextGen ECF system), and then mandate e-filing in every case in Supreme Court as well.  Like I said, baby steps.

What are your thoughts? Is this the right way to approach bringing e-filing to the Appellate Division? What do you like or dislike about the proposal?  What else would you want to see added in the future? I’m interested to know.

The Office of Court Administration will accept comments on the proposed new e-filing rules until July 24, 2017 by email to rulecomments@nycourts.gov.

One Reply to “E-Filing Comes to the Appellate Division ”